One of the key benefits is seeing the levels of all upstream and downstream digital audio channels simultaneously. Live audio on the A2B bus can also be streamed through the web interface. This instantaneous feedback can help engineers verify channel alignment to make sure the  audio is right where it should be. 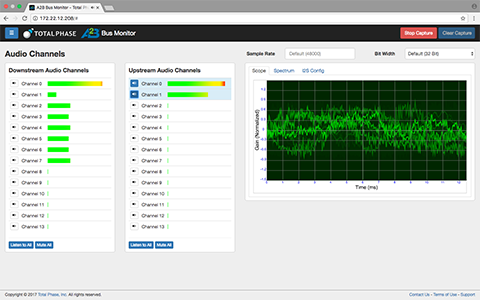 After a capture is stopped, an audio sample can be downloaded as a multi-channel WAV file through the web interface. However, the capture buffer in the A2B Bus Monitor is limited to less than 15 seconds. If more audio data is needed,  the WebSocket interface of the A2B Bus Monitor can be used to stream audio data directly to a disk.

To help developers get started, a sample Python script can be downloaded here. This example package includes the script  audio_capture.py and documentation about how to run it. This script requires Python 3, which can be downloaded for free from the Python website.

The audio_capture.py script captures one or more audio streams to disk as 32-bit signed, mono, little-endian PCM files, one file per channel. When the script is invoked with no arguments, the following information is displayed:

When the script has finished, the file  raw-audio-ch32.pcm should be located in the directory where the script was run.

Have questions? Click below if you would like to learn more, or have a personal demo designed to specifically address your needs.

This entry was posted in A2B