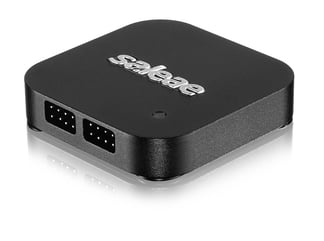 The machined enclosure is cleaned and then textured with a light glass bead blast to give it a uniform, elegant look. Next the part is anodized, brightened, colored and sealed. This is the finish quality you would expect from pro-audio equipment or a new MacBook.

Choose your favorite color to customize your Logic. The brightness is controlled by PWM, and we’ve RC-filtered the PWM so the LED does not contribute any measurable degradation to your signals.

The low jitter of the ADC sampling clock assures the SNR is not degraded.

Logic 8, Logic Pro 8 and Logic Pro 16 feature the Xilinx Spartan 6 FPGA, which interfaces to the ADC, digital inputs, and USB bridge. The FPGA also has the capability of performing over 5 billion DSP operations per second (over 10 billion on Pro 16). When you use more analog channels than can be streamed over USB at once, we need to filter and decimate that data in the FPGA – reducing the bandwidth without introducing aliasing. Logic Pro 16 produces analog data at a rate of 9.6Gbit – that’s a lot of data to process in real time!

PCB assembly is performed by our assembly partners in Fremont, California. Logic 4 is 6-layer, Logic 8 is 8-layer, Logic Pro 8 and 16 have, well, more layers than that.

To provide optimal signal integrity with a flying lead test probe, each input has a dedicated ground wire. In most situations, users can leave extra grounds disconnected. In addition, on Logic 8, Logic Pro 8, and Logic Pro 16, each input can be configured to be an analog input, a digital input, or both at the same time. Logic 4 has one input which is both analog and digital, while the remaining three are digital only.

Logic 8, Pro 8, and Pro 16 all have 8-channel ADCs. (Pro 16 has two.) Logic 8 has an analog sample rate of 10MS/s at 10-bits, and Logic Pro 8 and Pro 16 sample at 50MS/s at 12-bits. For Logic Pro 16, this is an awesome 9.6Gbit of data which must be handled by the FPGA. When you use more channels than USB can handle, the FPGA filters and decimates the data in real time so that the resulting signal does not exhibit any aliasing from frequencies above the new bandwidth.

An anti-aliasing filter prevents frequencies higher than the Nyquist frequency from being sampled. Any frequency content higher than Nyquist will result in aliasing, which, generally speaking, makes it impossible to compute an accurate FFT. Filters can have an adverse effect on both gain and phase so this must be carefully accounted for.

This entry was posted in Analyseurs