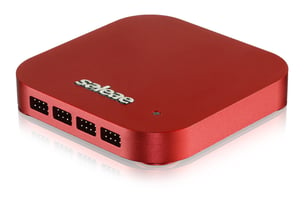 In the Jurassic period, all oscilloscopes and logic analyzers were big, bulky, bench instruments that were incredibly expensive. But a decade or so ago a variety of low-cost scopes and analyzers appeared. They are not analogous to the little shrew-like mammal that replaced the dinosaurs, since the high-end devices are essential for lots of engineering work and will never disappear. Instead, these USB-connected instruments fill a niche for those with limited budgets who are not working on bleeding-edge projects. Over the years we've reviewed a number of these.

Saleae's new Logic 16 is a sixteen channel USB-based logic analyzer (LA). It's one of the very few cross platform LAs available, with application software that runs under Windows, Linux, and on the Mac.

Its speed is a function of the number of channels being used. With three the unit clocks data in at up to 100 MHz. Nine channels (somewhat puzzling; one would think eight would be more likely) drops it to 32 MHz, and half that speed is attainable when all 16 channels are in use.

With all of the crazy voltage levels now used in digital circuits, it's nice that Logic supports two voltage ranges: 1.8 to 3.6V and 3.6 to 5V.

Capture data is streamed through short on-device buffers to the host computer, which can handle up to 1 TB of data given minimal transitions (the data is compressed). As a practical matter the software suggests that most host computers can handle up to about 1.8 GB. Like with all of these USB devices one must not overrun the USB connection, but we had no problems at all using a four-year old MacBook Pro with a 16 MHz acquisition rate.

The Logic 16 comes in a stunning metal case with non-slip rubberized bottom. It's spare, like an iPhone. Beautiful. There are no controls, just connectors for the probes and USB, and one LED. It comes with a zip-up carrying case that is so elegant it could be a high-couture fashion accessory. And it will all fit nicely in a purse for those ad hoc debugging sessions that always seem to come up at wedding receptions and cocktail parties.

Unlike some USB LAs, the Logic 16 does come with micro-grabbers for each of the channels and ground.

It's easy to connect the probe wires, and it's just as easy to connect them incorrectly. Doesn't the black wire go to ground? Nope. The instructions are very clear about this. The ground wire is carefully labeled. Black is input 0, because, as is common on these small logic analyzers, the wire colors use the resistor color code to denote their bit position.

The display is very simple, stark almost, with nothing extraneous on the screen. The black background mirrors the inky black of the machined aluminum case. The ease of use is unmatched by any other USB logic analyzer we've tried. Navigation is breathtakingly fast and smooth. 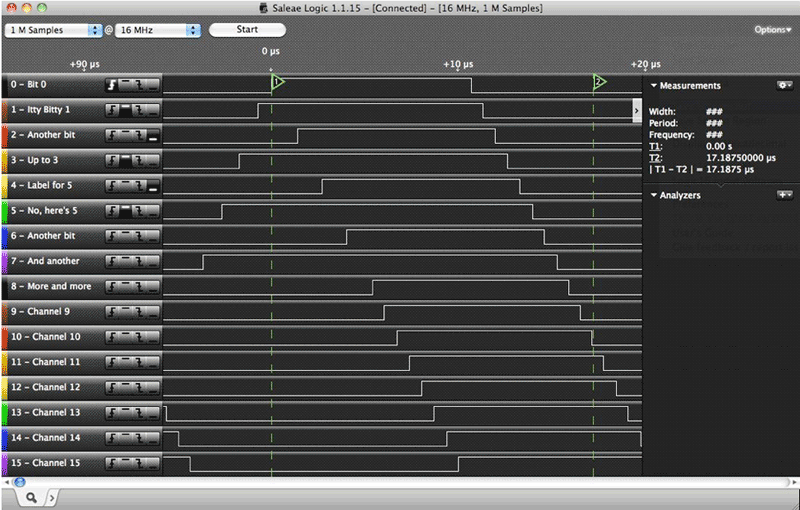 Some of these small LAs falter when uploading data to the host computer. It took about seven seconds to acquire and upload 100 million samples (of all 16 channels) gathered at a 16 MHz rate... which is exactly the time required to gather the data. The upload is seemingly instantaneous.

Learn more about the Logic Pro 16