On the August 11th, Oscium introduced WiPry-Pro and WiPry-Pro Combo, the next generation of best selling WiPry product line. WiPry-Pro enables an iPad, iPod touch, and iPhone to become a 2.4 GHz spectrum analyzer with the ability to view SSID’s and RSSI. 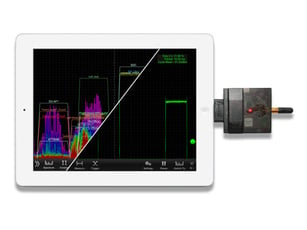 Matt Lee, Founder at Oscium said, “Adding SSID’s and RSSI to this product really make it the perfect solution. Oscium’s WiPry-Pro and WiPry-Pro Combo are the only products that provide access to SSID’s within the Apple ecosystem.” He went on to say, “We are also excited to give developers access to do their own apps using our API.”http://www.thelabeshop.com/Analyzers/Signal-Analyzers/Portable/WiPry-Pro-Combo

As developers contribute their own apps, the tool becomes more versatile and more valuable. Core functionality of the hardware will increase as more developers participate.

WiPry-Pro has the following specifications:

WiPry-Pro Combo is WiPry-Pro plus a power meter ranging from 100 MHz to 2.7 GHz. The power meter has the ability to capture, trigger and record the actual power output of RF amplitude up to 50 MSPS. Transmission details such as pulse width and duty cycle can be viewed making RF design and troubleshooting possible on an iPad, iPhone or iPod. For those involved in product design, an optional accessory kit is available which unlocks the ability to perform conducted measurements.