How to program and monitor an EEPROM chip

Question: I was looking for an I2C development tool to program an EEPROM chip and monitor the data as I program the EEPROM. Looking at your website, I found two I2C tools - the Aardvark I2C/SPI Host Adapter and the Beagle I2C/SPI Protocol Analyzer. Can you tell me what the difference is between the Aardvark and the Beagle? Which tool should I use?

Answer: First, let's discuss the differences between an adapter and an analyzer. The host adapter actively transmits data on the bus, and generally can perform as a master or a slave. The protocol analyzer non-intrusively monitors all traffic on the bus.

Now, specifically about the Aardvark adapter and the Beagle I2C/SPI analyzer: 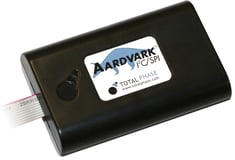 The Aardvark adapter and Beagle analyzer, when used in conjunction, enable you to transmit data, receive data, and log all activity on the I2C bus. By the way, if you're interested in saving a little money, we offer an I2C development kit, which bundles the Aardvark I2C/SPI Host Adapter, Beagle I2C/SPI Protocol Analyzer, one I2C/SPI Activity Board, and two 10-Pin Split Cables.

Watch an example of the Aardvark adapter and Beagle analyzer joining forces to program and monitor an I2C-based system that uses a 3-axis accelerometer here.

This entry was posted in Analyseurs, Development