How about the Soft(ware) stuff?
One of the most important goals that the developers had in mind was that the software should run under almost any operating system, with an identical user interface. This is something they’ve certainly accomplished. As far as we know, this is the only scope that works on virtually all operating systems: 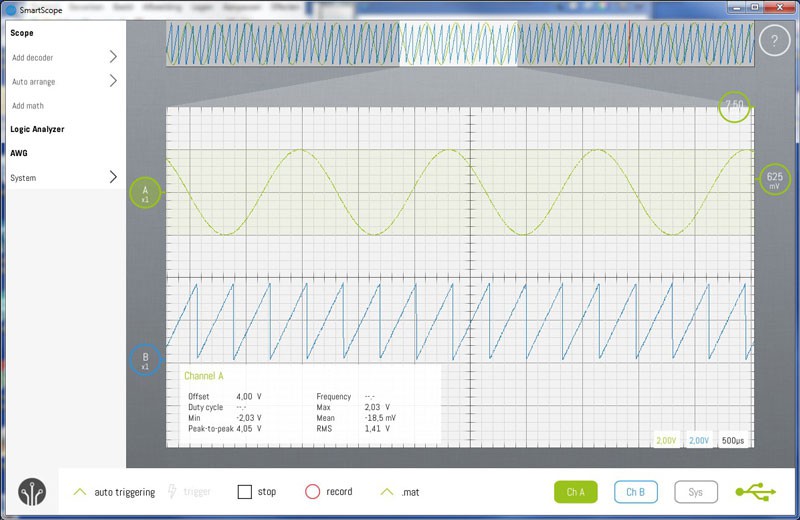 The developers also felt that the controls on most USB scopes were somewhat limiting. The user interface is usually some sort of copy of that found on hardware scopes, which has been in existence since the fifties. The whole control panel including
the knobs is often simulated on the screen, or pull-down menus are used for all kinds of settings. This was thought to be a bit out of date, and found not to be very intuitive.
The software for the SmartScope had to be different and should make use of modern interfaces such as touchscreens. This didn’t appear to be very difficult at first, but it required a lot of thought and hard work before a functional alternative was created.
The result is a control surface that reminds you of your first experience with a tablet or smartphone: it is a bit strange to start with, but it soon feels right. It’s as if you’ve given somebody their first tablet: they’ll play with it for a bit and after quarter of an hour it looks as if they’ve been using it all their life. The same happens with the software for the SmartScope. It takes a little bit of time to get used to it, but then it becomes so obvious that you don’t want to return to the old-fashioned methods.
Functionality
The software was installed on a Windows PC and an Android tablet. The Android device needs to be running Android version 4.0 or above, and requires USB-host support. The Android app can also be found on Google Play. For a tablet you will also need a micro-USB OTG cable to connect it to the SmartScope.

The combination of tablet and SmartScope creates a very useful mobile measuring
instrument, since the scope is powered by the tablet, which means you can use it away from the mains supply. When the software starts, it first loads the complete ‘firmware’
for the SmartScope into the FPGA. This takes just a single second. With this method you can be assured that you will always have the most recent version. You won’t need a bootloader or flash memory in the device either.
The software looks the same on both systems and always starts in oscilloscope mode.
On the left is the mainmenu with all the settings. At the bottom are a few of the most
commonly used settings. The rest of the screen is taken up by the scope display with a scale, where the measured signals will be displayed. These are the two analog inputs or the eight digital inputs when in the logic analyzer-mode; when one of the built-in serial decoders is used, the decoded data will also be displayed.
Up to now, there’s been nothing really special. What is remarkable is the absence of control knobs and buttons. Instead of using menus and knobs, almost everything is done via mouse clicks or (in case of a touchscreen) by swiping your fingers.

This does take some time to get used to. But once you’ve found out how to change a setting (such as changing the input gain using a pinch/stretch gesture with two fingers) it soon becomes second nature.
Each signal has an identically colored circle to the left of the grid, which hides a number of functions. When you touch it or click on it with the mouse a small menu appears that lets you set up the AC/DC coupling, triggering, probe attenuation or hide the signal. There is a similar circle at the right of the grid. The menu associated with this lets you select the trigger channel and either the rising or the falling edge for triggering. A status box can be displayed that shows the settings and a lot of detailed information about the signal. When it is no longer required, you can just drag it off the screen.
At the top of the display you can call up the hardware memory buffer. This shows the full contents of the buffer (4 Msamples). From here you can quickly and easily select a section that interests you so you can look at it more closely.
The menu on the left has a section that lets you set up the AWG. At the moment the user can choose from a number of standard wave forms, or import a user-defined signal from a CSV file, which can be stored in Dropbox or a local hard drive.
One thing that stands out is that a number of digital decoders are included as standard with the software. It’s unusual to see this for products in this price range (you would expect to pay for these as an extra). These decoders are used to unravel different types of digital formats and to display things such as the actual values and addresses of the data. At the time of writing, there are decoders for I2C, 3-wire and 4-wire SPI and UART included with the software, and there are more to follow. It is also possible for users to write their own decoder, and to make it available to the SmartScope community. Such a
decoder consists of a single DLL file, which should be added to the SmartScope system folder. This has been set up in such a way that it can work across all platforms without modifications.

This entry was posted in Oscilloscope | Generators, Test & Measurement